Ourense has always kept a close relation with literature. Auria, Auriabella, ou Augasquentes are just some of the names with which it has been portrayed in books; it was also nicknamed the “Galician Athens”, the “intellectual city” or, in the words of writer Carlos Casares, a “cultured and literary city” . If the origins of this particular link between city and literature were to be traced, we will go back to king Alfonso X of Castile, a medieval king who in his famous Cantigas praises the «boo vinno d’Ourens» (the good wine from Ourense).

It was with Friar Benito Feijóo, the scholar who led the Age of Enlightenment in Spain  who was born near Ourense, that the city took on a fundamental role in the development of Galician culture and language. In Ourense, Saco y Arce published the first Galician Grammar (1868) and Lamas Carvajal released O Tío Marcos d’Portela, the first monolingual weekly in Galician language, with which a long journalistic tradition was also inaugurated. Also here one of the key figures of the Rexurdimento period, writer Curros Enríquez, sang to the arrival of the train and the airs of progress.

Ourense also witnessed a second Rexurdimento movement, led by the Generation Nós literary group in the early 20th century. Intellectuals such as Vicente Risco, Otero Pedrayo or Florentino López Cuevillas led from this city a movement that opened Galicia to the avant-garde of the time, and that had its continuation in figures such as Xaquín Lorenzo Xocas or Eduardo Blanco Amor. The portrait that the latter made of Ourense in his celebrated novel A Esmorga (On a Bender in English) can be discovered through its own route. Also the work of writer Carlos Casares has a route in the city, ideal to know the contemporary narrative that has continued this literary Ourense to our days. 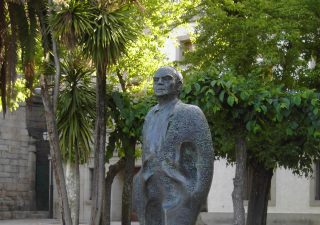 Her is perhaps the best known of our authors. His novels recreate the atmosphere of Ourense during his early youth: A Esmorga, Xente ao Lonxe, Os Biosbardos, La Catedral y el Niño … In the peaceful Bishop Cesáreo’s Gardens a sculpture pays tribute to him, next to the so-called Reader’s Corner. In Lepanto street a plaque identifies his possible natal house. His last address is on the street that bears his name. His remains rest in the St. Francis’ Cemetery. 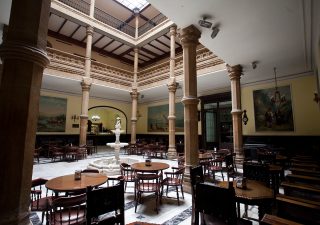 The local tradition of the gatherings or faladoiros, that even today enjoy good health, stands out for its uniqueness. These meetings in which knowledge was conveyed and shared were held in pharmacies, newsrooms, cafes, taverns … and, of course, in cultural societies: the Orfeón, the Ateneo or the Liceo, with its beautiful courtyard of columns within the Oca-Valladares Manor House. 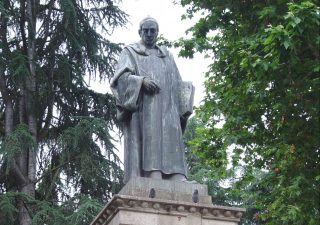 This statue dedicated to the Enlightened Benito Jerónimo Feijóo (1676-1748) was the first one to be built in the city, as a result of a public subscription in which Curros Enríquez, among others, participated. Its inauguration brought days of celebration, with literary contests in which Emilia Padro Bazán or Concepción Arenal participated. Outside the garden, another sculpture on a pillar: a faun on the back of an owl, made by Quessada. At the base you will find a tribute to comic-book characters, which many bought at the nearby bookshop La Viuda. 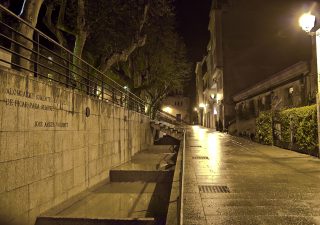 A few beautiful verses at Mercy Square recall this essayist, translator and, above all, poet from Ourense. Awarded with the National Poetry Prize and the Prince of Asturias Award in Literature, he lived and wrote away from Ourense, but he always kept the city in his memory, writing beautiful poems that evoke memories of his childhood. The former Bank of Spain, now an exhibition space, bears his name. His remains rest in St. Francis’ Cemetery.

On Paz street, Risco shared his childhood with Otero Pedrayo and Florentino Cuevillas. Together, they led one of the most important cultural projects in Galicia, the Nós magazine, which gave name to a whole generation and whose headquarters were located in the neighboring Santo Domingo street. A man of great culture, essayist and novelist, he took part in multiple gatherings in which the new generations of artists would be formed. In addition to the plaque on his native house, he is remembered with the street that bears his name. 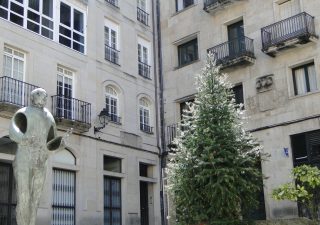 The so-called Patriarch of Galician Literature cultivated in his extensive work all the possible genres. A great connoisseur of Galician geography and history, this fact is found in novels such as Os Camiños da Vida, Arredor de Sí and even in tourist guides. He was also a great and remembered speaker. His statue watches over the Mayor’s Square, and his tomb can be visited in St. Francis’ Cemetery. 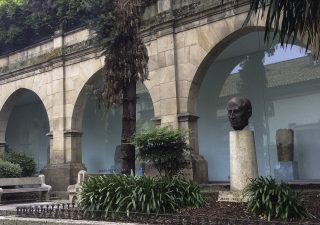 Archaeological studies take a prominent role in the cultural history of Ourense. One of the early scholars was the priest Marcelo Macías, honorary son of Ourense, who years later will give name to the group of intellectuals formed by Ferro Couselo, Florentino Cuevillas, Xaquín Lorenzo Fernández and many others. Since its creation in 1942, he was a promoter and supporter of the Provincial Archive and the Archaeological Museum. A sample of the funds of this institution is displayed next to the St. Francis’ cloister. 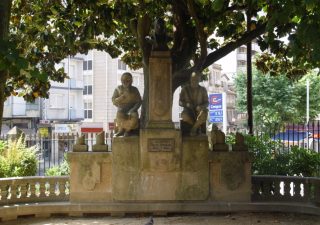 He is one of the founding fathers of Galician journalism, responsible for the launching in 1876 of the weekly O Tío Marcos da Portela. It was the first monolingual periodical publication in Galician language, based on Lepanto street. In Posío Garden, one of its favorite corners of the city, a sculpture pays tribute to him. He was the author of Catecismo do Labrego, considered the first best-seller in Galician literature. His remains rest at St. Francis’ Cemetery. 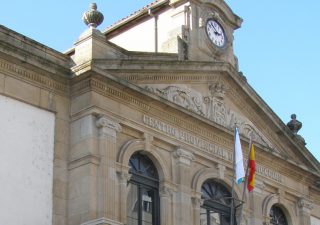 One of the features that have defined Ourense’s literary and cultural milieu is its didactic will: a long tradition of old masters training the new generations of artists. A symbol of this is the former School of New Teaching, opened in 1896. Marcelo Macías, Saco y Arce and Eduardo Moreno taught in it. It was the headquarters of the Provincial Archive and Museum, and also a meeting place for the so-called “Anticuaries”, a group in whose gatherings the latest literary novelties were discussed. 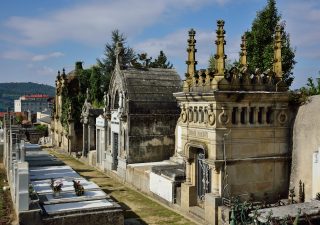 This melancholic and elegant cemetery, to which the rock band Los Suaves payed tribute in their San Francisco Express album, is since 1834 the main graveyard in Ourense. Here rest the remains of many of the authors that we have found in this route: Lamas Carvajal, Saco y Arce, García Mosquera, Xavier Prado «Lameiro», Xose Ramón Oxea «Ben-Cho-Sey», Blanco Amor, sisters Pura and Dora Vázquez or José Ángel Valente, one of its great supporters.