Former episcopal prison whose popular name (Crown Prison) refers to the shape of the tonsure that prisoners had to wear. The building, fully Baroque, was commanded in the 18th century by Bishop Juan Muñoz de la Cueva, who had also promoted the expansion of the bishop’s palace, now home to the Provincial Archaeological Museum. Its coat of arms is on the front gate of both buildings.

In the 1960s, the building became part of the City Council under a change from the current site of the Church of St. Pius X, where there was a small hospital, to Zamora avenue. It was completely restored and today is occupied by different municipal service.

Although it may be misleading, the name does not refer to the monarchy, but the shape of the tonsure worn by prisoners of the bishops jail in the 18th century.

Just opposite the gate of the former prison, there is a small garden dominated by the bust of Ferro Couselo (Ramón Conde, 1996), who was a historian, founder and later director of the Museum; and a calvary from the workshops of Anton Faílde.

Here, behind glassed porches, there is an exhibition of several milestones from Roman times. These were the cairns or kilometre points of the Empire, preserved in good numbers throughout the province; not in vain, one one of its major roads crossed this region: the Via Nova. 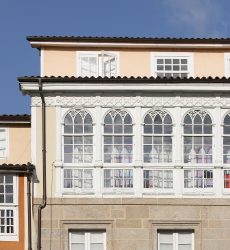