River Minho is the most important river in Galicia, crossing over a distance of over 300 kilometres where water has shaped the landscape and has filled it with life, hence we affectionately call it “Father Minho” .

In Ourense the river has adapted to the depression of the valley, so its waters flow calm and serene. The city can not be understood without its presence, as it has not only shaped and given wealth to the valley, but along with the hot springs it attracted the Roman legions who would settle and found Aquis Auriensis. The most comfortable river ford in several kilometres was here, and there they built the bridge known today Old Bridge, the first of the eight which has the city.

Bridges are only a part of the human landscape that frames the Minho in Ourense, although much of it has been lost in time: the washerwomen, the fishermen, the mills, the boatmen… From the existence of passenger boats to cross the river comes the name of the curious chapel in the neighborhood of As Lagoas, Portovello (from Galician Porto, “port” and Vello, “old”). But above all, the river is a place for biodiversity, a large green artery on whose banks arise hot springs along the riverside forest, full of willows, alders and birchs, home to birds such as herons and kingfishers; otters, amphibians and a whole extensive fauna have found a home in the river.

The banks of river Minho in Ourense have been equipped with large green trails ideal for walking, jogging, cycling and even enjoy a relaxing thermal bath. A good way to discover all its secrets and learn to love the river as local do is to follow its environmental itinerary: 14 kilometres from Oira to Outariz to discover, feel, enjoy and learn.

This tributary of river Minho is indisputably linked to the neighborhood of O Couto, the second district in population and virtually delimited by this stream. Although it has traditionally been subject to numerous environmental insults, in recent years the Barbana has regained the vigor of past decades, with well-equipped paths along its urban course in which it is a pleasure to walk. This river is very present on the city’s childhood memories, as the small dams of its mills created bathing areas in places like Seixalbo or the so-called Pozo do Inferno (Hell’s Pond), around what is nowaday the FabLab La Molinera.

Although it is smaller,  river Lonia has nothing to envy in landscape and history to the other rivers of Ourense. From the city centre the river welcomes us with its Roman bridge, a remain of an intricate network of communications among the sites of Velle, Sabadelle and Mende and connecting the river with Santomé. The path leading to the settlement, on a cliff above the river, is very beautiful, walking in the shade of dense vegetation and old mills, on a walkway connecting both sides. Once up, you have to look the Lonia potholes, holes carved into the rock for centuries due to erosion. 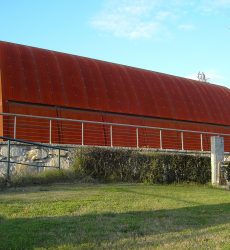 Hall of Nature in Oira

A space designed to explain visitors in an entertaining and understandable way the interesting natural and heritage values treasured by the riverbanks.

A space designed to explain visitors in an entertaining and understandable way the interesting natural and heritage values treasured by the riverbanks.