A tour of some of Ourense's buildings at the beginning of the 20th century, in which the genius of architect Vázquez Gulías stood out, and which today recall the transformation of the city.

In the mid-19th century winds of change were blowing in Ourense. The opening of the Vigo-Villacastín road (1861-1863), today Progreso Street, was a veritable economic revolution that brought with it a bourgeoisie enriched by the warehouses, shops, inns and taverns they opened up around the new route of communication. Urbanistically, with the new road Ourense ceased to be the medieval city closed on itself: the streets were extended and new ones were opened, such as Paseo street, while the architecture of buildings was transformed, inspired by the airs of modernity brought by the communications and the money of these new merchants and industrialists: houses of beautiful galleries carved in wood and granite.

In Ourense, Modernism is represented by two great architects. Daniel Vázquez Gulías (1869-1937), born in Beariz, graduated from the School of Architecture of Madrid (ETSAM) and then traveled to Paris, Vienna and Berlin. He was the municipal architect of Ourense and also the diocesan architect. His contribution to the transformation of modern Ourense is unquestionable with his clearly Modernist creations, endowed with a certain eclecticism where modernity and tradition dialogue harmoniously. We cannot forget the figure of Manuel Conde Fidalgo (1897-1984), municipal and provincial architect, to which we owe works like the Market or the church of Our Lady of Fatima. 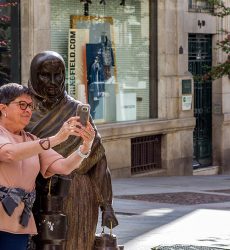 A route to discover the city’s main statues and sculptures

A route to discover the city’s main statues and sculptures 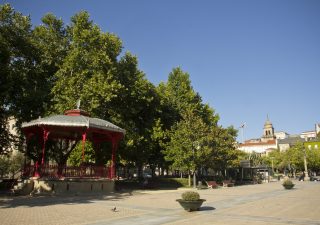 One of the city spots that best preserves the charm of other times. It was remodeled by Vázquez Gulías as a transit space between the old and the modern city. He also designed the bandstand and the beautiful Román y Saco House (1911), with its wooden gallery.

Also worthy of note is the building of the Central Market (1929), by Conde Fidalgo, whose classic-style façade resembles a church. 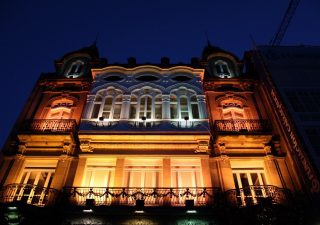 In the upper part of the Alameda Park stands out the Junquera House (1913), at number 9, a spectacular example of merchant housing. Of clear historicist inspiration, its façade does not lack references to Mercury, god of commerce.

At number 1, on the corner of Lamas Carvajal street, is Olmedo Department Store (1925), initially designed as a hotel.

The current bishopric (26, Progreso street) was projected in 1888 by Antonio Queralt as an extension of the Conciliar Seminary. The decoration, with an arched cornice, small loophole windows, crosses, etc., aimed to provide a certain medieval historicism to the set. 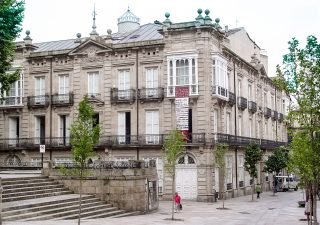 The Marcos Valcárcel Cultural Centre was the store and housing of the Simeón García family, fabric merchants. Designed by Serra i Pujol (1894), it is a monumental building of eclectic style, with symbols allusive to the commerce and industry in the frontal pediment.

On the opposite sidewalk is the Province Council (1912), designed by Vázquez Gulías, which was commissioned by the institution after acquiring this old yarn factory in 1895. To adapt it to its public function, Gulías added, besides the provincial coat of arms, a spectacular balcony in its central section.

Although it can not be visited, it is woth to make a small stop at Taboada House to admire its beautiful gallery. It was also a work by Vázquez Gulías, perhaps his masterpiece; in it he approached Gaudí’s. The name comes from the pharmacy that for years occupied the ground floor. 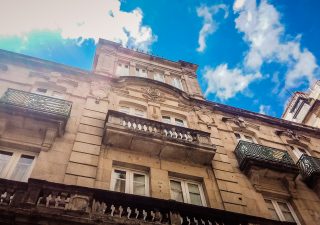 This street occupies what used to be the Dominican friars’ fields; it became an extension neighbourhood in the 19th century, during the city’s full transformation.

Here stand out several houses of the new urban bourgeoisie, such as the house of entrepreneur Felipe Santiago (Vázquez Gulías, 1910), at number 15. Also the restored white façace of the old Losada Theatre (Alonso Vargas, 1926) and the José Ángel Valente Cultural Centre, former headquarters of the Bank of Spain. 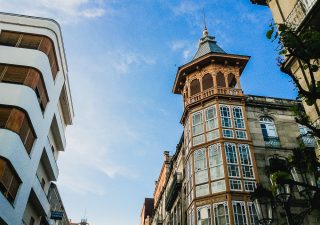 The crossing of Paseo street with Cardenal Quiroga street could well be one of the most architecturally important corners of the city. The building of the old Hotel Miño, with its remakable and colorful viewpoint (1909), stands out in front of the Román building (Mercader, 1892), nowadays a bank office. In the opposite corner are two later buildings of great interest: the house of architect Manuel Conde Fidalgo (1931) and the first Rationalist building in Ourense (Mariano Sanz – A. Alex Reinlein, 1935). 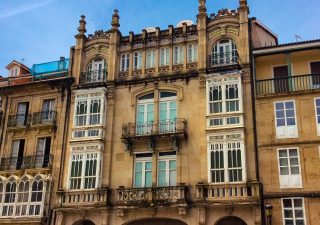 Although somewhat eclipsed by the monumentality of the City Hall and the old Bishop’s Palace, this is another work of great beauty by Gulías. The current headquarters of the Afundación Exhibition Centre, it is named after the merchant who ordered to be build it. The ornamentation of its façade stands out, especially the use of tiles, which was a real novelty at the time. 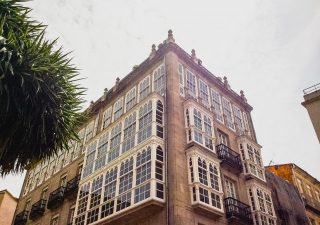 Noteworthy house in the Historic Centre that Gulías restored in 1905. It is linked to the figure of Pedro Romero Muelas, promoter of one of the first banks of the city. It has recently undergone a spectacular restoration.