A Bit of Ourense History

From the Neolithic period (6000-3500 BC) the area of Ourense has been a crossroads through which the nomadic tribes traveled. Many of these clans settled in the Minhoo valley, as shown by the pre-Roman settlements of Beiro, Madrosende, Oira, Santome and Valdegola, as well as the primitive settlement of As Burgas, the sources of thermal water that were the origin of the city.

In the 1st century the Romans arrived in Galicia, and at this time a strategic bridge was built over river Minho, defended by a garrison of legionaries who would settle in the surroundings of the current Main Square. With the legion and the bridge, the nucleus of population of As Burgas continued to grow and would give rise to an important Roman villa.

In the 5th century, in the midst of the decline of the Roman Empire, the Suebi, a Germanic people mainly agricultural, arrived in Galicia and founded a kingdom whose capital was Ourense. During the reign of Chararic began the construction of the first cathedral (now disappeared) in honour of Saint Martin of Tours, since then patron of the city. During the Visigothic period, Ourense was one of the main episcopal sites of the Iberian Peninsula, dependent on the Archdiocese of Braga.

In the 10th century, Ourense suffered the raids of Arabs and Normans and entered a period of decay, but after the 11th century the recovery began, led by the bishops of the diocese, authentic feudal lords: Lady Teresa of Portugal granted the jurisdiction of the city for the bishopric in 1122. Monsignor Eredonio and his successors rebuilt old roads, opened streets and squares, recovered the overturned Roman bridge and built the current cathedral. In this reborn medieval Ourense, full of artisans and merchants, wine was the main local business.

In the 12th century appeared the city council of Ourense, composed by representatives of the citizens, to face the abuses of the bishopric. The confrontation would culminate in the second Irmandiño revolt (1468), in which the citizens took the cathedral and demolished Ramiro castle. In the 16th century, the city council took over the government of the city, at the head of which would be a mayor appointed by the king; new streets and houses were also made.

During the 17th and 18th centuries the city lived a long lethargy. Ourense would rise again at the beginning of the 19th century, when the city was designated capital of the province. With the arrival of the railroad and the construction of the Villacastín-Vigo road, the city began to develop on both banks of river Minho, becoming a of eminently commercial and administrative city to which a bourgeoisie coming from Castile would arrive.

In the 20th century, Ourense experienced some demographic growth due to emigration from the province, becoming the third city of Galicia by population. Important facts were the merging with the municipality of Puente Canedo in 1943, the emergence of new neighborhoods and its conversion into the main communication node (by train and road) of the Spanish northwest. 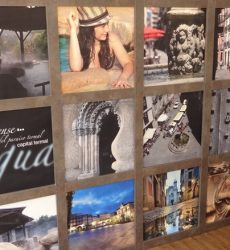 Brochures, plans, guides, routes and maps to prepare your visit.

Brochures, plans, guides, routes and maps to prepare your visit.