The thermal springs of As Burgas are one of the most emblematic and beloved spaces in the city, directly linked to its origin. Here was born the ancient Aquis Aurienses (“the city of golden waters”), a Roman settlement formed around these mineral-medicinal springs that today keep flowing at more than 60 ° C in the heart of the Historic Centre.

Visiting them is essential to discover the history of Ourense and to understand its intimate relationship with the waters: to touch them and be surprised, to unveil their mysteries at the Interpretation Centre and to enjoy a bath in the thermal pool, practically the same way and in the same place that our Roman ancestors did two thousand years ago.

For centuries healing, leisure and worship have coexisted here. This has been the citizens’ meeting point, the origin of legends, a literary setting and the background of infinite postcards. For all this, it is no coincidence that Ourense is known as the “City of As Burgas”.

Since there is a human presence in the valley, these springs have been used for medicinal, religious, leisure and practical purposes of a very different kind. Although before the romanization it is certain that the inhabitants of the neighbouring settlements knew and used them, it would not be until the arrival of the first legions that the area of As Burgas began to develop, by erecting buildings devoted to the world of the water. Archaeological excavations have exhumed vestiges of a pool-sanctuary from the first century AD and many votive stones that refer to an indigenous divinity, Revve Anabaraego, resident of the springs and responsible for their therapeutic properties. The names engraved on the altars come from different parts of the Roman western world, indicating that As Burgas was a centre of pilgrimages in ancient times, and one of the most important indigenous sanctuaries of the Iberian Peninsula.

Over time, the Romans, who were great fans of the hot springs, built a bathhouse next to the sanctuary, where they would meet to discuss their daily affairs while relaxing in the comforting waters. Vestiges of both buildings, which coexisted in time, can be visited today at the gardens of the Interpretation Centre.

During the Roman occupation there was in As Burgas a religious sanctuary and a small bathhouse for enjoying the waters. Their remains can be seen in the gardens around the current thermal pool, where nowadays you can take a bath just as it was two thousand years ago.

In the Middle Ages, a dark age in the history of European thermalism, the sources of As Burgas kept being exploited by the population. It was the Catholic Church itself that protected the springs, since in addition to fulfilling an important preventive function against the dreaded plague and other diseases, they were a relief for the pilgrims to Santiago de Compostela that went across the city. The holy character that the Romans gave them had endured and adapted to thsee new times, being linked now to the figure of the Holy Christ in the Cathedral.

The natural heat from the sources historically meant a great resource compared to other energies such as firewood or coal. It is not surprising that the artisan industries of the city were relocated here. First were the bakeries, that in the 14th century began to install here small ovens that would last for centuries. Already in the 15th century also settled here butchers, tanners and washerwomen, occupying basins like the one on the esplanade where today is located the thermal pool. The current fountains, from the 17th and 19th centuries, already show the awareness that As Burgas was a singular and central space in the city, not only for its inhabitants but also for the travellers, who left in their journals and chronicles unanimous record of the surprise and fascination of this strange phenomenon.

The current layout of As Burgas, declared a Site of Cultural Interest in 2007, is due to a long process of works and reforms carried out recently, and which allow to enjoy this space in its fullness: a meeting point with history and the memory of Ourense and a different thermal experience that will surprise you and win your heart. 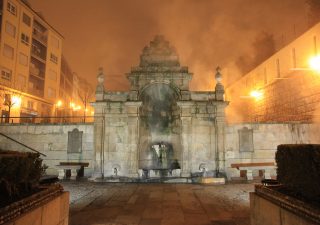 Fountains of As Burgas