On the 7th and 17th of each month (except if one of them is Sunday, which would be moved to Monday) the fair is held in Ourense, so at lunchtime it is advisable to travel to the fairgrouds (located next to A Chavasqueira thermal baths) to taste one of the oldest and most established gastronomic traditions in Ourense.

The menu consists of octopus and meat cooked in a cauldron, occasionally also grilled meat, accompanied by a good Ribeiro wine. For dessert, always coffee and bica (butter sponge cake), and if there is no hurry maybe some liquor.

Octopus is the delicacy that is often used to celebrate special occasions, so it is not strange to find on Sundays several octopus sellers with their cauldrons distributed in the city, preparing rations for a clientele that waits to eat it in situ or take it home: octopus is the star dish of a family Sunday lunch.

On the 7th and 17th of each month a fair is held in Ourense. That is an occasion to taste the octopus and meat at the facilities of A Chavasqueira. If the fair falls on a Sunday, it is moved to the next Monday.

It is a recognized fact that the best octopus in Galicia is the one prepared inside the province of Ourense, far from the Atlantic coast. Although surprising, it has a historical explanation that goes back to the Middle Ages. At that time, the Cistercian order of Oseira, 20 kilometres far from the city, possessed territories that extended towards the sea inlet of Marín. For working them, the peasants from the coast paid tribute to the monastery, a tithe that often came in the form of octopus. Thus began the tradition of importing it, developing a drying technique that maintained its taste and properties in an era in which the transports were slow, and consolidating the traditional octopus recipe, that was cooked at inland pilgrimages and markets. 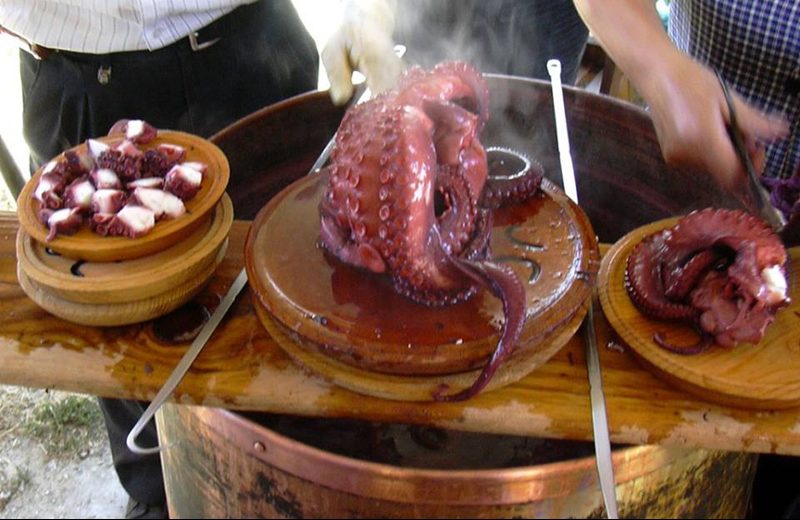 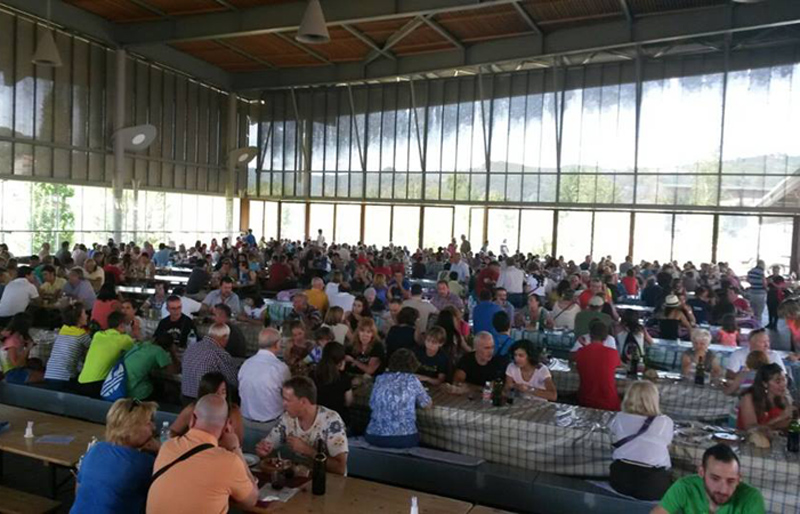 To prepare a good octopus it is necessary to stir the octopus so that it is not hard, or to buy it frozen. Once defrosted or tenderized, boil water in a pot, preferably made of copper. When it is boiling, take the octopus by the head and immerse it three times in the water (by introducing and removing it immediately) so that it does not release its skin: that part of the process is called “scaring the octopus”. Let it cook for 40 to 50 minutes, depending on the size of the piece, and then drain it and cut with scissors into 1-cm thick pieces.

The typical way to eat the octopus is served on a wooden plate with chopsticks: cutlery must not touch it. It is dressed with thick salt, oil and paprika, which can be sweet or spicy. It is optional to accompany it with boiled potatoes made in the octopus’s own water, which gives them a pink tone.