More than a hundred clay figures make up the curious nativity scene by Baltar. It is perhaps one of the most beautiful scenes in Galicia, both in its composition and the subject: a picture of a long-lost Ourense. Beyond the religious theme, we can find children playing at the square, the street photographer, the field works, the tavern, the oven, the inhabitants of the roads …

All statuettes were made by artist Arturo Baltar, who began it in 1967 commissioned by the local Association of Nativity Scenes Designers. What at first was only the traditional nativity scene grew year after year with new elements, until in 1980 the chapel of St. Cosmas and Damian was restored to welcome it permanently. The set, complete with murals by Xaime Quessada and friezes by Virxilio, is Ourense’s art at its purest.

The contemplation of the set is almost hypnotic, an initiatory journey into the past of the city to find, in the centre, the Birth of Jesus.

In 2010 the City Council restored the annex building (possibly a former convent attached to the chapel) to create the exhibition space, installing a set of altarpieces by this author: the nativity scene, which until then only could be visited at Christmas, became a permanent exhibition all year long.

Closed on weekends and holidays 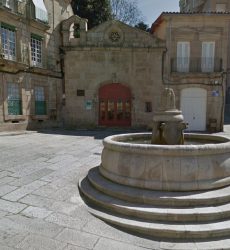 Known for being the site for Baltar’s nativity scene, it was during the Middle Ages one of the city gates.

Known for being the site for Baltar’s nativity scene, it was during the Middle Ages one of the city gates.