Originally from the 12th and 13th centuries, although with numerous subsequent restorations, the Holy Trinity Church is one of the oldest ones preserved in the city. It has a basilica floor, highlighting the access gate from Trinity Square, whose statues give a good account of the history of the temple, linked to an ancient hospital for pilgrims.

The portico comes from the ancient St Roch’s Hospital (16th century), a building that for many years occupied the site where today stands the Post Office, in Alameda Park: hence the representation of the saint and his dog Melampus. Possibly the other two characters in the two medallions are two famous physicians from antiquity: Hippocrates and Galen.

Linked to this church there was a hospital for pilgrims, already referenced in the 12th century, whose situation here was possibly due to the presence of hot springs.

The church is the oldest one preserved in Ourense: its atrium, in which we can see a beautiful calvary in Plateresque style (15th century), was built on an ancient Roman necropolis.

We can still appreciate some Romanesque details and even the fortified appearance from the original stonework, although the decoration of the apse, with flamboyant-Gothic cresting, indicates that it was reformed in the 15th and 16th centuries. Outside, two cylindrical towers make it look like a fortress, something it shares with the Cathedral. Inside, in the basilica, the polygonal chancel stands out, covered with ribbed vaults with richly decorated keystones. The nave is covered with a false vault and divided in sections by pointed arches. The sculptural ensemble is made of two Baroque altarpieces on the sides and a major one, from the 16th century, in the central nave, complete with a geminated font of holy water.

Linked to this church there was a hospital for pilgrims, the Trinity Hospital, already referenced in the 12th century, possibly built due to the presence of hot springs in the area. It occupied the current parsonage next to the church, on Villar street, where the pilgrims arrived to from inland Portugal or the Via de la Plata. Only one gate with ogee arch connecting to the atrium and decorated with sawtooth is preserved. On the side entrance of the church, in frint of the old hospital, there is a scallop shell, the symbol for pilgrims to Santiago de Compostela.

Opening hours according to worship 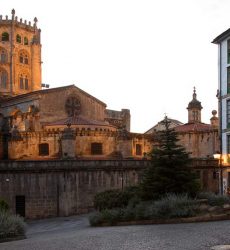