Romanesque Art at the Ourense Cathedral

St. Martin's Cathedral may be one of the most interesting Romanesque cathedrals in Spain but also one of the least known.

St. Martin’s Cathedral can be described as a transitional Romanesque temple: its construction was extended through the centuries in a sometimes haphazard way, especially considering that, although the initial project must have been of great magnitude, the economic situation -not always benevolent- made that many parts had to be adapted, delayed or never even completed.

For the beginning of the works, the date of consecration of the main altar (1188), can be taken as a reference. The construction of the basic structure would take about 80 years (it was fast when compared with other cathedrals in the surroundings), although some parts were only resolved temporarily: for instance, the final section was covered with wood. To finish, a gate and two towers were built (the current western façade, with access to St. Martin’s Square), although one of them was never completed. This is a classical Romanesque solution, which intended to provide stability to the ensemble and save the wide uneven terrain.

In parallel to the construction of the temple, the Bishopric took care of consolidating the place with relics; not only from the patron saint St. Martin, but also from local saints such as St. Euphemia. The intention was therefore to turn the Cathedral into a temple for pilgrims.

The conflicts of the 15th century, such as the Irmandiño revolts or the attack of the Count of Benavente, as well as later additions (chapel of the Holy Christ, ambulatory …), have made disappear or hidden most of the Romanesque stonework. However, the temple still preserves many elements that allow us to know in detail the architecture and sculpture of that time: façades, portico, museum … 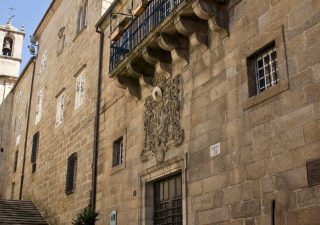 Here you can see the Cathedral’s original facing: the wall with its buttresses and semi-circular windows. The north gate had to be rebuilt after the attacks of the Count of Benavente in 1471, although it is possible that it followed the original scheme, indebted to the western gate of Santiago cathedral

Some elements of the original gate were reused: the bases of the columns on the east side, the column statues, the angel embedded in the shaft, the inner capitals and the polylobed inner archivolt, with various figures of Matean influence. The towers also maintain the Romanesque stonework, especially the eastern one.

At the buttress of the western tower and its attached wall we find two representations that could have been part of an old zodiac on the gate. A third piece is kept in the Cathedral Museum.

Although the apse was much modified with later reforms (dome, ambulatory, chapel of the Holy Christ, clock tower …), part of its Romanesque decoration can still be seen, such as the arches disposed in corbels with geometric decoration. The rosette forms a cross with equal arms ending in circles. At one end you can see the figure of a lion with a lamb in its claws.

Towards the north a varied decoration is maintained both at the corbels and at the metopes, with vegetable, geometric or figurative motifs. All this is sheltered by small arches and on the cornice, a decoration of balls.

At the southern side, successive reforms made the arches disappear. Thus, we may find corbels that do not support anything, but retain much of the decoration.

The southern gate has reached our time almost without being modified. It is developed with a large arch supported by smooth columns and attic bases, with vegetal and figurative capitals.

The main arch is decorated with horseshoe arches. The next archivolt, with vegetal decoration, culminates with an incomplete Christ. Then, another archivolt with leaves, among which stand out figures with cartouches and, on the internal thread, David’s fight against the lion and the bear and the dispute between Solomon and the queen of Sheba, with the presence of Marcouf. The tall body is decorated with small arches and decorated metopes and on it a rose window.

Regarding the lateral face, later constructions do not allow us to see the original Romanesque elements, although we can see how, as in the northern façade, the initial section has eaves with small arches that later continue on a simple cornice.

The Cathedral originally had five chapels (it was common at the time) arranged in a Latin cross plan, which is preserved. The main arm is divided into three naves with eight sections, with typical Romanesque cruciform pillars and semicircular arched windows supported by a pair of columns. The vaulting solution is Gothic.

The main chapel and the straight sections of two others, which nowadays are the start of the ambulatory, remain complete. The central chapel, devoted to Saint Martin, is the one that best preserves its layout, despite the fact that a large part is covered by altarpieces. Beneath the triumphal arch, an angel with spread wings holds a solar disk of Matean influence.

Christ of the Forsaken

Another gem preserved by the cathedral is the statue known as Christ of the Forsaken, one of the few Romanesque carvings of Christ preserved in Galicia.

It is a rare representation of the crucified Christ, dated around 1200 and with exceptional artistic importance. It consists of a large Christ, with a royal crown and four nails: he shows a rigid posture that is only broken by the brief inclination of the head and limbs.

It must have had a preferential place in the cathedral until the fame of the Holy Christ ended up relegating it. It is currently located on one side of the baroque Chapel of the Assumption, specifically where the Argizs (promoter of this chapel) are buried.

The main gem of the cathedral, this ensemble is inspired by one of the greatest works of the Romanesque, the Gate of Glory in  Santiago de Compostela by Master Mateo, from which come its theme and sculptural resolution. Although it does not reach its artistic level, it has an enormous plastic quality. Despite the modifications, the set still retains all the splendor of its style.

From the initial model the smooth shaft columns are preserved; also the capitals (with vegetal, zoomorphic or human motifs) and the columns with the prophets and apostles. The central arch ends with the archivolt of the 24 elders of the Apocalypse. Their instruments are those of that time: organistrum, lute, violas, harp, flutes …

The rest of the motifs from the Compostela gate are not preserved or were never included, since the vault, tympanum, mullion and figurative foundations were modified in the 16th century. The current polychromy is possibly from the 18th century.

Treasures of the Cathedral

Interesting exhibition of various works of art belonging not only to the Cathedral but to the entire diocese of Ourense. The collection, as we see it today, arose in the 20th century and is located in the 14th-century unfinished cloister: the Claustra Nova.

The hall itself presents curious architectural samples, highlighting the decoration of the entrance door, prior to the cloister project: archivolts with vegetal decoration, capitals (some of them figurative) and, on the tympanum, a marble Agnus Dei. It was designed by the same author of the other gates.