The Ourense Cathedral’s Museum occupies the Claustra Nova, the cathedral’s unfinished Gothic cloister. It was projected from the late 13th century to the early 14th century. but only one of its corners was completed. Since 1954, this space (which underwent a recent renovation) was recovered to host the current collection of treasures, with works from the Cathedral and the processes of Confiscation.

Singular both for its content and its location (only the contemplation of the few capitals made is already worth a visit), it keeps unique pieces such as the Missal Auriensis, an incunabula from 1494 considered the first book printed in Galicia.

The museum is accessed through a Romanesque door with a clear Matean influence. It has a double semicircular archivolt and vegetal decoration, capitals (some figurative) and a tympanum representing the Agnus Dei (1200). It was designed by the same author of the other gates.

The room is made up of high foundations, attached columns and niches covered with Gothic canopies, pointed arches and four-part vaults.

Singular both for its content and its location, it keeps unique pieces such as the Missal Auriensis, an incunabula from 1494 considered the first book printed in Galicia.

Among its treasures there are pieces of exceptional quality, such as the so-called “St. Rudesind’s Treasure” or “Celanova Treasure”, without a doubt the most precious item of the collection. It is a set of pieces from different periods (10th-13th centuries) from the Celanova Monastery, traditionally linked to its founder, St. Rudesind. It brings together works of Romanesque art, such as liturgical combs, an ivory staff, a linen and silk miter, a portable altar and a silver chalice. In addition, it includes 8 figures of a Fatimid (medieval Egyptian art) chess made of rock crystal and in which, as a curiosity, knights were replaced by elephants.

Singular is also the Missal Auriensis (Monterrei, 1494), an incunabula with the honour of being the oldest printed book conserved in Galicia.

St. Rudesind’s Treasure is essential, including a collection of chess pieces made of rock crystal, a true gem of medieval Egyptian art.

There are high-quality pieces of colonial religious silverwork, such as the Baroque silver scintillator (1690), the Processional Cross (1515, a gift of the Count of Benavente) or the Jet Cross (originally from Leonese workshops, dated of 1497), among others. As Ourense has no coastline, it is also curious to find here, among chalices and religious paintings, various boats as votive offerings.

Romanesque Art in the Museum

In addition to those already mentioned, the collection exhibits other pieces of great interest also in Romanesque style.

Tenant and columns from the Cathedral’s old main altar: a decorated granite block that belongs to the first altar of the Romanesque cathedral; it is linked to its consecration in 1188. In its upper part it has a niche that would house the relics of St. Martin of Tours.

Centaur-sagittarius (12th century). Sculpture that belonged to a zodiac that would occupy a privileged place on the cathedral’s northern façade of the cathedral. Rebuilt in the 15th century, this façade preserves two other decontextualized elements from this zodiac.

Virgin of Reza (12th century). A wooden carving representing the Virgin seated on a throne. Originally from the parish of Reza, from where it was brought to the cathedral to pray for the rain. Despite the mutilations it suffered, it is of high quality and still retains its polychromy.

Seated Virgin of Seixalbo (13th century). Sculpture carved in granite, representing the Virgin crowned and with baby Jesus on her lap. He carries a book while blessing with his other hand.

Limoges altar front (13th century). One of the gems of this Treasure. It is a set of enameled copper plates with figures in relief of Limousin art. It is discussed whether it was part of an altar front or an altarpiece. The 53 preserved plates include a statue of Christ, symbols of the evangelists, the Virgin and saints (among them St. Martin, at whose feet is the offering figure of bishop Alfonso, who commissioned this work).

Limousine enamels (13th century). Along with the aforementioned altar front, other Limoges enamels were found in the form of reliquary chests and a plaque with the figure of the crucified Christ.

Chapel of the Holy Christ

Treasures of the Cathedral

A tour to follow the trail of this purely medieval style in the city. The walk begins at St. Martin’s Cathedral and continues exploring the still unknown rural Ourense.

A tour to follow the trail of this purely medieval style in the city. The walk begins at St. Martin’s Cathedral and continues exploring the still unknown rural Ourense. 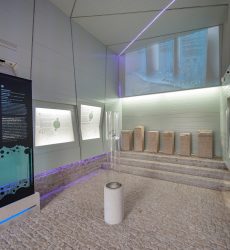