This is the second bridge in the history of the city: its opening, in the early 20th century, brought the title of “Old” for the Roman Bridge, until then the only one over river Minho. The Modernist design of its central arch reminds of Gustave Eiffel’s creations.

The history of the bridge began in 1895, years of transformation in the city, when the member of parliament Vicente Pérez started the procedures for the construction of a new bridge over river Minho to ease congestion in the Roman Bridge.

Under the design of engineer Martín Díez de la Banda, the works were completed and the bridge was opened in 1918 in order to facilitate and improve the communication on both sides. The stone used in the factory of the bridge came from the nearby village of Outariz, and was carved by stonemasons of Cotobade (Pontevedra) under the direction of Díez de la Banda himself.

Anchors, bridges, oak leaves and other motifs decorate the bas-reliefs of the stone arches at the ends of this bridge, a symbol of the splendour of Ourense in the early 20th century.

The bridge is located upstream the Old Bridge, about 450 metres away. 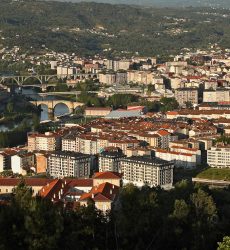