Sculptures are an essential part of urban scenery, present in the cities since ancient times. In Ourense the placement of these motifs began in the late Middle Ages on the façades of the churches: for instance, some of the best samples are on the Cathedral’s north gate. Religious reasons explain the placement of calvaries, large stone crosses on pedestals at crossroads that protected travelers. Today, their silhouettes recall Ourense’s eminently rural past, although most of them were made in modern times.

It was not be until the 19th century that Ourense incorporated modern urbanism. The city went beyond the limits of its medieval almond-like shape, new communication channels were opened and the taste for decorations transferred to the public space. In this context, many fountains were installed (mostly confiscated from the neighbouring monasteries) and the first public sculptures began to appear, honouring outstanding characters. The first ones were of the Enlightened Father Feijóo and of Concepción Arenal.

In the 1980s Ourense lived an authentic creative outbreak by the generation of the artistiñas, gathered around Café Volter at Eironciño dos Cabaleiros square. There work spread throughout the city, with murals and sculptures with various themes, both abstract and figurative. Minho Park has become a beautiful outdoor gallery that includes works from these authors.

The catalogue of urban sculpture in Ourense is wide. In order to discover it, here you have a proposal of ten singular pieces that, for different reasons, you should not miss. 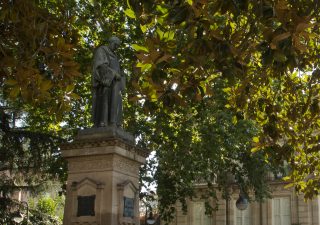 Inaugurated in 1887, this piece in bronze, much to the taste of its time, is the work of Juan Soler y Damau, placed on a pedestal in granite by Zabala. It honours one of the key figures of Enlightenment in Spain, born in a village near Ourense. The idea of placing this statue came with the bicentennial of its birth, in 1876, but it took more than a decade to materialize. Literary contests, fundraisers and scientific activities supported the installation of the oldest sculpture in Ourense. 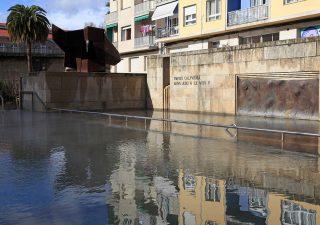 The space occupied by the thermal springs of As Burgas, a symbol of the city, was the object of a profound remodeling in 1989, at which time two singular sculptures were installed here. The first is the House in the Cloud by Luis Borrajo, the first sculptor to bring abstraction to the city’s public sculptures. Its elevated position was achieved in 2010 with the opening of the thermal pool, which in winter surrounds this piece in bronze with a steam cloud. At its side there is a relief by Acisclo Manzano honouring Calpurnia Abana, an allegory of the nymphs of As Burgas that accompany the bathers. 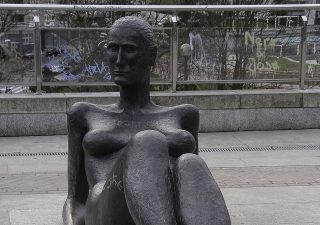 This large bronze piece represents the body of a woman. It is the work of local sculptor Borrajo and one of his few sculptures, maybe the only one, in which this usually abstract artist chose figuration. It was installed in 2002 at the end of Alameda Park, on a granite pedestal almost at ground level.

An area for the childhood games for many citizend, including the author of this piece, is honoured by Xaime Quessada in this sculpture, a faun on the back of an owl in bronze on a stone pedestal. On the floor, small plaques of bronze recall familiar characters, protagonists of the comics that were bought in the kiosks and read and exchanged among friends in this place. 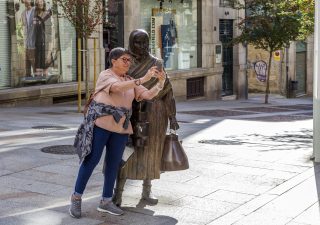 Probably one of the most photographed sculptures in the city. This work by Ramón Conde (1999) has become a meeting point in one of the busiest streets, in a corner, in addition, of great architectural value. It honours a traditional trade and an image of the Ourense of yesteryear: the women who, every morning, went to the city to sell the milk produced in the neighbouring farms. 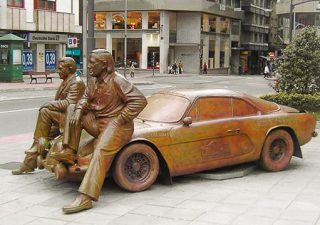 Also by Ramón Conde, it competes with The milk Woman for the honour of being the most photographed sculpture of the city. This curious sculptural group recalls the figure of a pioneer, Estanislao Reverter, promoter of the Ourense Rallye, a competition that started in 1967 and continues today. Here he appears with his inseparable collaborator Antonio Coleman sitting on the mythical Alpinche, a Renault Alpine with a Porsche engine; an idea of Reverter himself, with which both competed on numerous occasions.

In 2001 sculptor Xosé Cid made this piece, a memory of one of the traditional trades that is most associated with the city. Here the homage is double. On the one hand, to the chestnut, essential food in inland rural Galicia’s traditional diet; Ourense devotes one of the main dates of its festive calendar, the Magosto, to this fruit. On the other hand, to the work of women: chestnut sellers, milk women or greengrocers … so often invisible.

Today it is still possible to find chestnut stalls in the streets, with their delicious aroma permeating the autumn days. 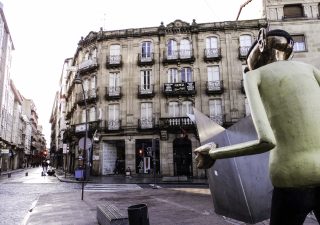 This curious piece by César Lombera (2002) represents an endearing character with a black beret reading a newspaper: it is O Carrabouxo, the protagonist of the cartoon that since 1992 is published daily by cartoonist Xosé Lois González in the local press. His particular vision of the news has turned him into a reference of graphic humour in the city. 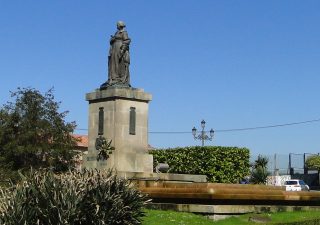 This pioneering woman, a tireless defender of human rights, has been linked to Ourense, a city she visited many times. It is not surprising, therefore, that the sculpture that today honours her, a work byAniceto Marinas on a pedestal by Parada Justel, was one of the first in Spain to be erected after her death. The statue was inaugurated in 1898 at Alameda Park, and afterwards it was moved amidst a great controversy to its current location, in front of the old courts, recalling her important role in prison issues. With the transfer, the original pedestal disappeared.

Shortly after the Millennium Bridge was inaugurated, Xosé Lois Carrera made this figure in granite which, with its 7 metres in height and 3 more than 30 tons in weight, welcomes all who come to the city. This imposing male torso represents river Minho and the union of its banks. Its title honours the death of Roy, the replicant from Blade Runner.