The City Hall, centre of the local government, presides over Ourense’s Main Square with its Classicist façade. Finished in 1889, it was the third consistory that the city had, after the previous ones from 1519 and 1698 disappeared because of alterations, takedowns and the passage of time.

The city council raised its first City Hall between 1516 and 1519. Until then, the meetings of the council representing the civil power took place in atriums of churches and squares, such as the nearby Alameda Park. The building would soon be subject to enlargements until the construction of a new one in 1698: it was one of the first architectural incursions by Castro Canseco.

In 1873 a landslide forced to build a third building, awarding the project to architect Queralt, which ended it in 1889 with a Classicist façade including an arcade. In the 1940s it was completed with an extension within the same style.

Before having its own building, the city council met in atriums of churches or squares, such as the Alameda Park.

The current façade is topped with a clock and the coat of arms of Carlos II. The symbols of Ourense’s coat of arms (a tower, a bridge and a lion) are included as a detail on the railings of the balconies of the first floor, both front and side. To the left of the front gate, there is a plaque from the National Geographic Institute reminiscent of the altitude of the city above the sea level (135 m) and its latitude and longitude.

The interior is organized around a majestic central staircase by which you can access the Noble Hall, dominated by an imposing stained glass window with the city’s coat of arms. 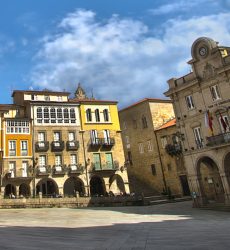