Romantic Gothic cemetery at the top of the city, at the foot of Montealegre Hill, linked to the former St Francis’ Convent. Bathed in light from sunrise to sunset, with the scent of laurel and cypress trees and the beauty of its mausoleums, gravestones and corners, this place captivated many local poets and artists who found here their last resting place. The San Francisco Express LP by the iconic rock band Los Suaves is a tribute to this melancholic and elegant graveyard. It was declared of Cultural Interest in 2000.

Its history dates back to the early 19th century, when the city, immersed in a process of transformation and growth, was in need of a new cemetery outside the urban core to cover the increasing demand. The Franciscans thus gave land for its construction next to the convent. It was inaugurated in 1834, with the blessing of the bishop; in 1887, the secular cemetery was built in a small annex. The burial space would be extended multiple times to the South and East, up the slopes of Montealegre.

It is worth stopping to look for the tombstone of Professor Xosé Ramon Fernandez Oxea “Benchosey”, an anthropologist who humorously invites his friends to “visit him” in his new home, warning that no eulogies will be allowed.

The interest lies both on the beauty and monumentality of the graves (made by artists like Piñeiro, Víctor Macho, Faílde … but also from the emblematic metallurgy Malingre) and on its inhabitants, because here are buried many great names of literature, arts and thought: writers as Blanco Amor, Otero Pedrayo, Vicente Risco, Lamas Carvajal, Cuevillas, Xavier Prado “Lameiro”, Marcelo Macías, or painters as Fernández Mazas, Prego de Oliver, Parada Justel and Jesús Soria. The cemetery has its Association of Friends, of which poet José Ángel Valente (buried here) was its honorary president. For years they have fought for its recognition and protection, achieving that in 2000 it was declared of Cultural Interest.

The opening of St Francis’ Cemetery marks a milestone in the history of burials in the city. In medieval times, the dead were buried inside churches (in the case of noble families) or in the cemeteries near them, as was Magdalene Square. From the 16th to the 19th century, as the city that grew so little, the two urban cemeteries, the one at Trinity Church and the one at St Roch’s Hospital (in a part of what is now Alameda park), were enough for the population.

Ourense currently has three cemeteries, the historical graveyards of St Francis and As Caldas, in the neighborhood of A Ponte, and a modern one in Santa Mariña. 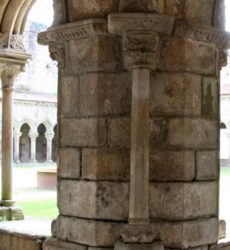 A cloister without a church, the last remain of the Franciscan convent that later became military headquarters. The beautiful decoration of the arches is worth a visit.

A cloister without a church, the last remain of the Franciscan convent that later became military headquarters. The beautiful decoration of the arches is worth a visit.