The beautiful St. Francis’ Cloister, a gem of Galician Gothic architecture, testifies to the existence of an old convent in the upper part of Ourense, on the Montealegre hill. It was founded in the 14th century, after the fire that destroyed the first Franciscan convent in the city, located in the current Mayor’s Square. The order remained here until the 19th century.

In 1843 the old convent was transformed into infantry headquarters, which would remain active until 1984. The change of uses triggered numerous reforms. The most significant was, in 1951, the transfer of the church’s chancel and façade to St Lazarus’ Park, where it remains to this day. The orphaned cloister can now be visited.

Declared a National Historic Monument in 1923, St Francis’ Cloister has outlived its eventful history, preserving the beauty of its 63 arches practically intact, all decorated with plant, animal (real and fantastic) and human motifs carved in stone. Although it is considered a clear example of Galician Gothic, the Romanesque influence is very present.

The capitals of the 63 arches of the cloister are a beautiful catalogue of mythological beings, animals and plant motifs carved in stone.

The cloister is distributed around a seemingly square plant: none of its sides has the same number of arches. These are supported by double columns, except the first four and the last four in each row. On the side walls are preserved various funerary sepulchres and the columns of the chapter house. The access to the funeral chapel of the Sandoval family, under a festooned arch, is noteworthy.

Next to the cloister you can see the nave and the old church, still standing. In the south side we may find the Chapel of the Venerable Third Order, today transformed into an exhibition space where part of the funds of the Provincial Archaeological Museum are displayed. Nearby, located in the old convent’s former orchard, is St. Francis’ Cemetery, a Gothic cemetery in which some of the great names of Galician culture are buried.

In recent years the old convent has been transformed to become the great cultural ensemble of Ourense. In addition to the Sculpture Gallery Hall, here is the Municipal Auditorium, a spectacular contemporary building that hosts different kinds of shows.

Furthermore, in 2019 the Ourense Nodal Library was moved to this area: a true cultural hive housed in a magnificent building around a central garden. The space itself is worth a visit. Along with the library, the Provincial Archive was recently installed, after some rehabilitation work on the convent designed by architects Casabella and Raído. This work has won, among other recognitions, the special mention of the 2020 Architecture and Urbanism Awards granted by the Colleges of Architects of Spain. 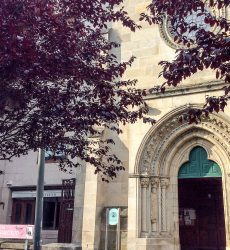 Originally at St Francis’ Monastery, this small church hidden among huge modern buildings hides a bagpiper in the capitals of its façade.

Originally at St Francis’ Monastery, this small church hidden among huge modern buildings hides a bagpiper in the capitals of its façade. 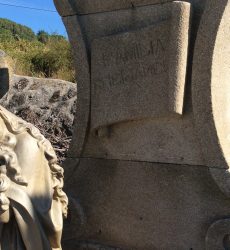 Romantic Gothic cemetery in which some of the most important local intellectuals are buried.

Romantic Gothic cemetery in which some of the most important local intellectuals are buried.