The province of Ourense has one of the largest collections of Romanesque art in Spain. It is also one of the hallmarks of the capital, with an interesting heritage that begins with its two great monuments, St. Martin’s Cathedral the former Bishop’s Palace, and later expanded into small churches in its rural perimeter.

This route intends to promote this unique legacy, following the Romanesque footprint not only in the most monumental works (Cathedral and Palace), but also in more humble temples and other artistic manifestations. Some of these pieces, despite being less known, are also true Romanesque gems: St. Baia’s Church in Cudeiro, the carving of the Christ of the Forsaken or St. Rudesind’s Treasure.

From the 11th to 13th centuries, the improvement of economic conditions and the increase in the influence of the Church favoured the creation of new temples and the expansion of religious orders in Western Europe, giving rise to new monasteries and the first great cathedrals. In this context, a great artistic style emerged with a specific language, which extended throughout Europe and can be considered the first European artistic style: the Romanesque.
Thanks to the Way to Santiago, the most important pilgrimage itinerary in Europe, the Romanesque entered Galicia and became the reference style throughout this territory.

In Ourense, which had been appointed as an episcopal lordship in the 12th century, the bishop promoted two large buildings: a new cathedral and a palace for him. These two works were especially influenced by the Romanesque of Santiago de Compostela, and in turn will serve as inspiration for the new parish churches in rural Ourense.

Arch of St. Michael in Bóveda 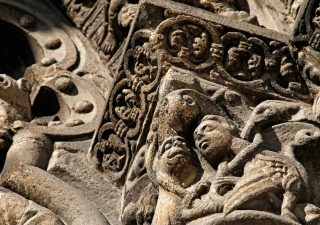 St. Martins’s Cathedral is perhaps one of the most interesting Romanesque cathedralsin Spain, but also one of the least known. 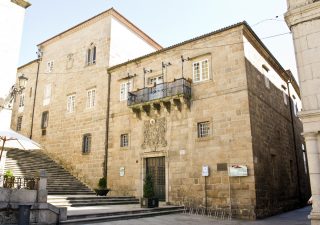 One of the few Romanesque civil buildings still standing, it represents the power of the bishop in Ourense, which was an episcopal lordship since 1122. The central body of the inner courtyard is organized into two levels: the ground floor with an arcade of semicircular arches, and the upper floor with windows. Part of the north wall and the building, an old refectory that today houses the Provincial Archive, are also Romanesque. 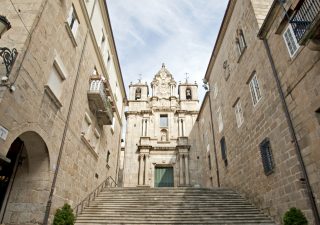 There is little information on what would the original missing church (a part of the bishop’s palace) look like. It is discussed whether it was the site of a previous cathedral or a temporary cathedral-like temple. An inscription on its north side dates its consecration in 1084 (1122 of the Hispanic Era). The new church (1722) conserves the marble columns on its façade, probably from a late Roman building or from the primitive (pre-Romanesque) early medieval church. 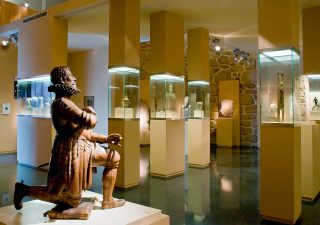 The former palace has been the headquarters of the Provincial Archaeological Museum since 1951, although it is currently closed. A part of its collections is exhibited in a hall arranged in the old chapel of St. Francis’ convent, nowadays a cultural centre. This showcase gathers an interesting selection of sculptural pieces from the Romanesque period. 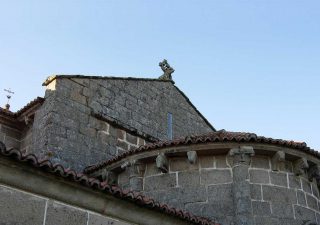 A reference and example of rural Romanesque architecture in Galicia, this parish church retains much of its original appearance from the early 13th century. The main doorway has two semicircular archivolts with vegetal decoration of Matean influence, as well as the capitals. The apse is divided into five parts, one of which is partially covered by the sacristy, and is topped with an Agnus Dei. 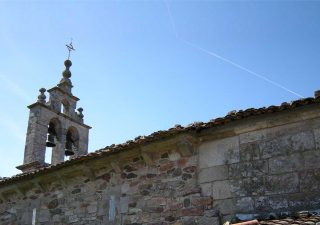 The Romanesque church of St. Andrew (13th century), in the village of Castro de Beiro, sits on an ancient pre-Roman settlement from which magnificent views can be seen.

The church of Palmés (13th century) was linked to the now-disappeared monastery of St. Columba of Naves. Its restoration in the 19th century made disappear a good part of its Romanesque design, but vestiges are preserved on the southern and northern façades: corbels with geometric, vegetable or figurative motifs and pieces of checkered design on the cornice.

On a privileged position on the slopes of Mount Santa Ladaíña, with views over river Miño, this parish church is Romanesque in origin (13th century), although it was extensively modified afterwards. The corbels on the southern wall stand out, with geometric, vegetable and figurative motifs. 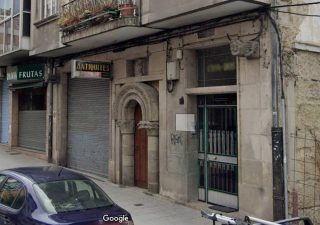 A beautiful Romanesque arch that was once part of a church and today “camouflaged” on Zamora avenue.

The contemporary façade of this parish church contrasts with its modern sacristy, where we can see some corbels that, although reused, are characteristic of their Romanesque origin: geometric motifs and monstrous heads. Stonemason marks can be seen in some ashlars. 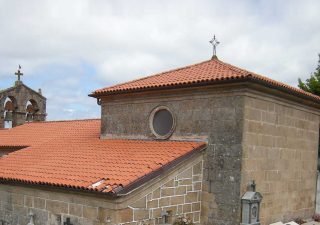 This church combines several styles, although its interior preserves purely Romanesque elements, such as the triumphal arch and the capitals on which it rests, with vegetal decoration. Both of them are from the 13th century.

Although very transformed, this church preserves Romanesque elements dating from the early 13th century. The southern façade stands out: its gate has a semicircular arch and mouldings at different heights, one of them representing a human figure in a robe. The cornice is supported by brackets of simple decoration.